My reaction to certain kinds of art is sometimes, even unknown to me, historically circumscribed. I see a certain kind of painterly construction and my response is an echo of the same response I had ten years or more ago, when I witnessed a similar image in a gallery or museum setting. Perhaps I now bring to it a greater range of echoes, and over time I develop new language to enrich and aggrandize the nature of my experience. The paintings of Eric Brown fall into this category. His recent solo exhibition, Punctuate, on view at Theodore Art in Bushwick, was a quiet revelation. These overly simple works use color and gaps in space to create subtle tensions. His use of titles expands their impact as metaphors for the human experience, which can be dramatized and quantified with so little apparent industry. Take “The White Triangle” for instance (all works 2017). This painting involves the use of three areas of bright color: red, yellow, and green, with the red and yellow areas rising up from the bottom of the canvas with a single hard edge beneath them. Yet only the yellow area maintain its regularity, while the red area arches off leftward in a diagonal line, and both are murkily bisected by the green area, which seems to float or flow downward, obscuring each of them and leaving between them only a small white area in the form of an upside down left triangle. Focusing upon this area one could easily be distracted from the dynamic of the shapes surrounding it. Yet the space of absence created by the White Triangle is both a fulcrum and a mirage. It sets up a dynamic that never ends. Look here, it says, now look away. Look here, look away.

Other works in the exhibition operate on a similar basis: the union of opposites, while others merge or obscure overt building blocks. A further example of the first model is “Cyril Laughs” in which a black background is interrupted by yellow forms that resemble the inside view of someone’s mouth. Here the inference is loaded by the title, though the same meaning might be ascertained after a lengthy viewing. Using metaphoric forms that can only have a limited range of meaning does nothing to subtract from them their power to move the viewer, when the formlessness of Brown’s designs drop their mystery. Alternately, a work such as “Flag Day” plays with the visual assumptions that accompany certain colors in certain orders. If it looks like a flag it must be one. This painting resembles the flag of Russia, three broad shapes in red, white, and blue that almost leer at us in colors modeled after those of the American one. Yet in Brown’s version the horizontal lines of the real flag are made jagged, as if to trace a more circuitous and perhaps mysterious route around the notion of liberty and its relationship to statehood. Eric Brown’s solo exhibition is a chance to explore how perception punctuates form while art punctures life.

Popular posts from this blog

DOUBLE AGENCY: "2FOR1" BY POONEH MAGAZEHE 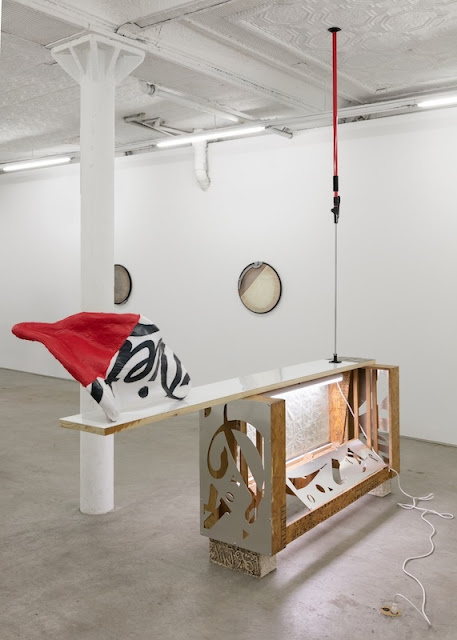 One current exhibition you should be sure not to miss is “2for1” by POONEH MAGAZEHEat Brennan and Griffin Gallery (122 Norfolk Street, thru 2/3), which consists of several inventive mixed media sculptures that originate from an equation that may seem merely good marketing but that begs a philosphical inquiry as well.

As she states in her thesis "This desire-driven toggle between the place you’re in and place you want to be is nimble and ultimately survivalist. The peripheral overtakes plain sight, transforming into double vision.” The admixture of disparately aesthetic forms that Magazehe presents us with creates an experience that begs the question of how more of one thing, or one element sharing different extremities, better that the simple and self evident object itself?

Her installation departs from her initial equation into an approachable and engaging creative metier combining found materials with fabricated ones that act like ciphers for the gap between the two. They are …
Read more


The artist is a natural idealist who begins with form and ends with meaning. When Kathleen Elliot first began to discover herself as an artist she had an immediate interest in the use of glass to create forms reminiscent of nature itself—branches presenting leaves, flowers, and fruit, which over time coalesced into abstract forms as doppelgangers for the real objects she wished to emulate. Every artist develops a world view through their work that may not manifest in linguistic terms. However, the protracted activity of art making, developing the channels of meaning, and growing through the stages of one's discipline, makes one adroitly sensitive to the importance of a value system to accompany it. There is a fervor to the new way of thinking about how art can reflect life in these tumultuous days of political rancor. It’s been building for 20 years and is finally peaking in every corner of society.The voyage of the artist is, less and less, a pure exploration…
Read more